Prologue: "Curtain" is the boarded up front of a home. Inside, young white woman busts open an upstairs window and yells at a black banker down in the street who is trying to warn her the Memphis sheriff is coming... but she has locked herself to fight foreclosure and eviction...

• Emboldened by Obama’s first inauguration in 2009, Mac, an African-American WWII veteran and voting rights leader from the sixties struggle in Tennessee, decides to harass the retired Irish-American sheriff, Zeke, who almost killed him. For decades since a beating by a mob hired by sheriff Zeke, Mac has suffered pain, crippled leg, and post-traumatic stress and anger. Mac decides to rebuild Tent City across from the sheriff’s home - but this time, instead of sheltering African Americans evicted for trying to vote as he did in 1960, he will shelter people evicted from their homes in black neighborhoods of Memphis as a result of scam mortgage loans and the financial crash of September 2008. His wife is afraid he's trying to recreate his glory days from the struggle for voting rights and first class citizenship.

• The sheriff’s granddaughter interrupts their battle, arriving hell-bent on getting to the first meeting of the Tea Party on February 16, 2009 to “take our country back!” She is hiding the fact that she too has been evicted from her home in Memphis when her husband lost his job. When an east coast operator arrives to recruit her as a grassroots organizer, Mac enrages the sheriff by comparing his daughter’s willingness to do the recruiter’s bidding to the sheriff’s own servicing of the White Citizens Council and the Klan. Mac raises the first tent. A gentle moment by lantern light with his estranged wife.

• When the tent burns down (red-out lighting effects between two scenes), Mac holds the sheriff at gunpoint, sure he set the fire. As the sheriff denies any involvement... a potentially explosive connection builds between the two life-long enemies in the embers of Tent City. But before they can kill each other, an reconciliation occurs that triggers a very American rebellion.

Epilogue: ...Instead of rebuilding tents to shelter the evicted, Mac heads to Memphis with Zeke and Luanne to tear off the wood boarding up foreclosed homes... starting with Luanne’s home.

Time: February 2009 in Rural Fayette County, Tennessee. One Set: Field and ramshackle farmhouse, separated by a path.
Cast: 7 (five men, two women - 3 of the men and 1 of the women are African-American)
Background: Fictional but based on actual people and events in TN, SC, AL including apologies by former Klan sympathizer, police chief and other white men in 2009 for actions in 1960s. 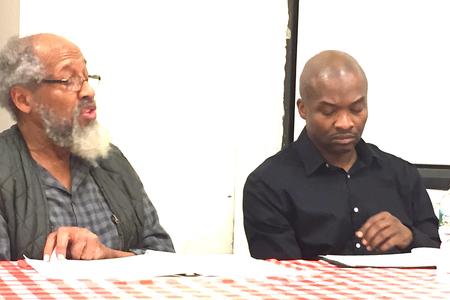 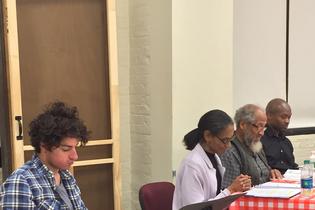 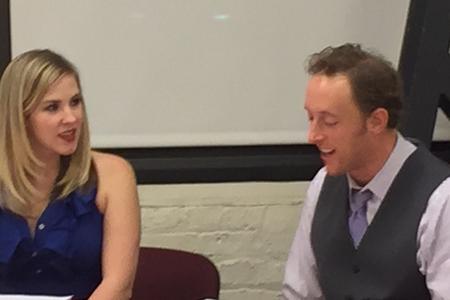 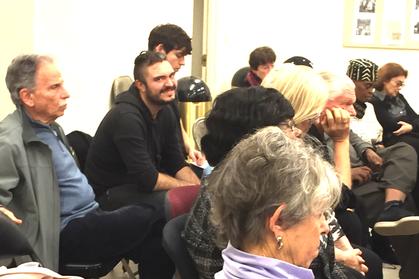 Miranda Noelle Wilson as sheriff's granddaughter Luanne hell-bent on getting to the first meeting of the Tea Party on Feb 16 2009 "to take our country back" and John Long as Keith, a recruiter for grass roots Tea Party organizers from a D.C. consortium of corporations and Congressional reps. 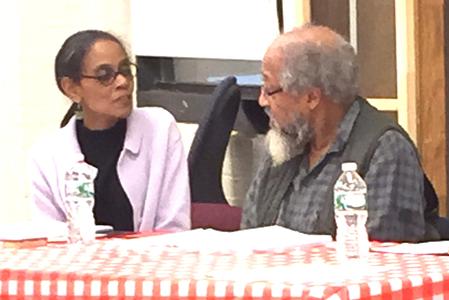 Hamilton Meadows as Sheriff Zeke furious that Mac will build a tent city in a field next to his farmhouse… and irritated, but thoughtful, when Mac points out his granddaughter is ready to jump to do the bidding of the new Tea Party just as Zeke did for the White Citizen Council in the 60s when he almost killed Mac and other leaders of the voting rights struggle.

Synopsis of Embers of Tent City: 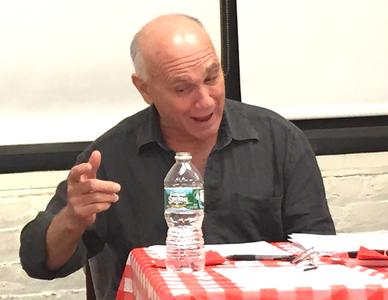 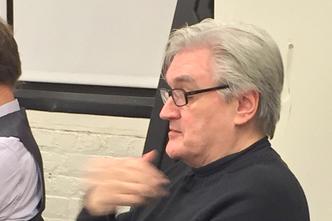 Arthur French (Mac) with Michael A. Jones as Tyrone, a banker who wants Mac to help shelter his clients who are facing foreclosures and evictions

Connie Winston and Arthur French as Victoria and Mac McFarley. Mac, a WWII vet, wants to shelter people evicted as a result of the '08 financial crash.